A SPECIALISED HANDLING BEAM FOR EVERY LIFTING ASSIGNMENT 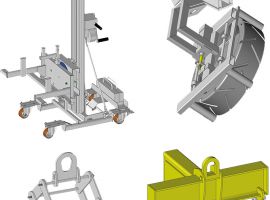 The handling beam is a lifting and handling accessory. It is fitted directly to the hook of the electric chain or wire rope hoist. If the pieces to be handled are of long length, they can be hung from two hoists to find the correct load balance.

Each handling beam has different characteristics, which relate to the trade and pieces to be transported.

AMIO Levage, specialised for 20 years in lifting and handling solutions, offers you vacuum handling equipment in the form of vacuum lifting beams, magnetic handling with magnetised lifting beams, and not forgetting the mechanical beam which can be transformed into multiple configurations.

The first uses a tube which provides vacuum lifting. This type of vacuum handling beam can lift loads up to 300 kg with fast speeds and is widely used for handling boxes, barrels, bags, wooden plates etc...

The second uses a technology called "Venturi" named after the Italian "Giovanni Batista Venturi", derived directly from "Bernoulli's theorem". The simplified explanation of the operation is based on the principle of supplying compressed air into a calculated cylindrical tube section which will be called "the admission tube". This air flows into a cylindrical tube which also has a calculated section which is the "exhaust pipe". This is positioned along the same axis as the admission tube. These two tubes are connected by two conical pipes which should be of an adequate length to maintain the most regular laminar flow possible. A cylindrical tube must be connected to this, perpendicular to the two conical parts, called the "suction tube". This section will also have been sized. If we inject compressed air at 5 bar into the admission tube, the air moves towards the exhaust pipe. During the passage through the neck of the junction area of the two tubes depressurization will occur and this depression creates suction in the suction tube, resulting from very low pressure in this area. We can install a suction cup to this suction tube, to be used to handle the object. When the suction cup is in contact with the piece to be lifted, suction will continue until it creates negative pressure and when it reaches a certain level the part can be handled. Of course this explanation is just an example. Each vacuum lifting beam using the Venturi principle is equipped with components enabling the complete operation of the machine, while others are used for monitoring and security. This type of vacuum handling beam can be used to handle loads of up to 300 kg

The third solution is to use a vacuum pump which is directly attached to the frame of the vacuum handling beam. The vacuum pump is an actuator that can extract, move, compress or remove air or gases in various industrial facilities. Unlike with the Venturi system, that requires a supply hose with compressed air or an attached compressor, with the vacuum pump you only need a power cable. The operating principle is the same when the suction cups are in contact with the piece to be lifted. The vacuum pump continues suction until a negative pressure has been reached, controlled using a device to measure it. This component is called a "vacuum gauge". When the pressure has been reached, the piece can be handled. Each vacuum handling beam using the vacuum pump principle is equipped with components enabling the complete operation of the machine, while others are used for monitoring and security. This type of vacuum handling beam can be used to handle loads of up to 10 tonnes. 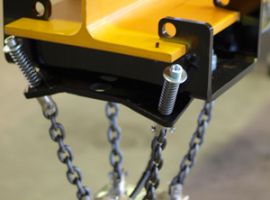 There are two technologies used for this type of lifting equipment, enabling loads up to 20 tons.

The first technology is the "permanent magnet"

It can be used alone or in group, assembled on a metal structure. Together this forms a magnetic beam. The operating principle is related to a physical phenomenon known as "magnetism" manifested by forces which either attract or repel one metal object to another.

Each magnet has two poles, a "North" and "South" and if we put the two poles, "North-North" or "South-South" physically together, repelling forces are generated and the two magnets repel each other. If the same experiment is carried out with the South pole of one of them with the North pole of the other, the two magnets will be attracted and stick to each other. These forces are called attracting and are used to lift metal pieces, while the repelling forces can be used to release the same piece. The permanent magnet is used in many fields, such as sensors in medical machines, in DC and synchronous current motors, etc. They may also be present on handling beams. Each magnet has a mobile magnetic core and is fixed in a metal frame.

The movement, either by rotation or long-travel, either manually with a handle or by electric, pneumatic or hydraulic controls, brings the core to the piece to be handled. This handling method has an advantage when compared to a magnetic handling beam, which requires electricity for magnetization. In the case of permanent magnets, the need for external power is required only for positioning the core to pick up the piece. Then the power can be cut completely and the permanent magnet lifting beam will not be affected. It will hold the piece until power returns, allowing for the release of the piece being handled.

The second technology type focuses on an "electromagnet"

As for the above solution, it can be used either individually or assembled in groups on a metal structure, to form a magnetised beam. The electromagnet is made up of a piece of soft ferromagnetic material constituting the magnetic circuit, surrounded by a wire forming the coil. In order to avoid losses due to the presence of eddy currents in the case of AC power supply, the magnetic circuit must be made up of laminated plates or ferrite cores.

When the coil is crossed by an electric current, this creates a magnetic field which is channelled by the magnetic circuit. When all of this is housed in a metal casing it behaves like a magnet. The electromagnet's force is directly proportional to the current passing through the coil and to the number of turns of the latter. This method of handling has a real advantage due to the possibility to adjust the current level. This makes it possible to pick up a thin piece to be stacked on others of the same thickness. This is called stripping. The technology of this type of handling beam ensures very advanced and successful solutions, especially for automation solutions.

Unlike the permanent magnet beam, it needs a continuous electrical current to hold the pieces during handling and for this it is equipped with a battery system to hold the piece for about twenty minutes in the instance there is a power cut. The equipment allows the operator to release the piece by releasing the lifting brake, either to bring the load to the ground or to pick it up with a forklift truck.

This type of lifting device can be used in many configurations. It can be very simple, such as a beam with two lifting hooks, rings or clamps with the possibility to adjust the lift distance. Others may combine a mechanical part with moving parts controlled either by electrical, pneumatic, hydraulic controls.

There is a standard range for the first example cited above and a special range exactly meeting the needs of each client. Our engineering department liaises with the client and defines the specification.

Then our account managers draw up and define one or two technical solutions that will be presented to the user. Having come to a decision, we move onto the implementation phase, certification, testing and commissioning in the workplace where the client wishes to use the handling device. This type of beam has practically no technical limits and can withstand load capacities up to 100 tons.

Commercial department
Send us your requests by email!